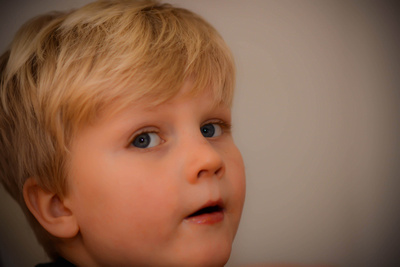 Charlie was born in 2007 to Charlene and Swifty, who live in a small two bedroom apartment in Malibu, California.  Charlie seemed the typical baby, but as he grew older his parents felt that he was not making the eye contact or other connections of children his age.  Charlie started pre-school, and the school recommended he be evaluated.  After various tests and consultations, Charlie was diagnosed with autism.  Charlie was then three years old.  Charlie did not talk or otherwise communicate, engaged in repetitive behaviors, and was not aware of the dangers of the outside world, often bolting away from his parents.  One time Charlie ran out onto the Pacific Coast Highway.  To compound the challenges for Charlie’s parents, both are former addicts in recovery.

Autism is a modern medical dilemma for which there is no medically proven cause or cure.  The U.S. Center for Disease Control and Prevention estimates that 1 in 68 American children have an autism spectrum disorder.  Among boys, that number is 1 in 42.  A study by the Harvard University School of Public Health has found that caring for an individual with autism can cost more than $3 million in that individual’s lifetime, and that the total cost of autism to society in the United States will soon reach $35 billion per year.

However, based upon current medical knowledge, early intervention with proven behavioral therapies are changing the way the autistic brain functions,  and are substantially improving the outcome for autistic children.  It is possible these intervention therapies may ultimately significantly “re-wire” that autistic brain.

It took over a year, and many medical visits and meetings with government health care representatives, but Charlie finally was approved for intervention therapies.  Since he was four, Charlie goes to the Shabani Institute in Santa Monica, California every weekday afternoon for four hours of intensive Applied Behavior Analysis therapy.

Charlie’s parents learned through an autism outreach program that dogs were being specially trained to assist autistic children, and they thought a trained companion dog might be a great help to them.  Although not all autistic children will tolerate or benefit from a dog, Charlie’s parents believed that a dog might provide safety and security to Charlie.  And because of the naturally social nature of a dog, maybe a dog could help with Charlie’s social development.

To obtain a trained service dog, the family had to be approved and had to raise the money required to acquire and train a special dog.  It took some time, but the family raised the money and was approved for a dog, and were then placed on the list for the next litter, if an appropriate puppy was in the litter.

Aspen is a yellow lab who was born in the summer of 2012 in Sebastopol, California.  After he was selected from his litter as having the special personality and temperament required to be a candidate for a service dog, he went to live with dog trainers Elise Lalor and Tim Houweling of Monkey Trail Ranch in Hollister, California.  Aspen was first socialized, and then trained for Charlie.  He passed his tests, and in the Spring of 2013 Elise and Tim delivered Aspen to Charlie, Charlene and Swifty, and the work of integrating Aspen into their lives and having Aspen help Charlie began.

Charlie is an adorable boy, and he smiles.  The family is luckier than some with an autistic child because Charlie is willing to have physical contact with his parents.  Charlie is a fast runner.  He likes to jump up and down on his trampoline.

Charlie goes to school in the mornings, and has four hours of intervention therapy every afternoon.  The family had to sue the school district to obtain an aide of Charlie to keep him on task at school.  The school has not allowed Aspen to go to class with Charlie because they feel that Charlie would need to supervise Aspen, which he cannot do.

Charlie is now eight years old and still does not speak.  He communicates with his parents and others with signs which has greatly reduced the the frustrations of Charlie and those who need to help him.  Charlie is no longer in constant motion and will sit and focus on games.  When he is outside with his parents, Charlie is tethered to Aspen so he cannot bolt away.  Aspen will chase Charlie is he accidentally is able to run off. Aspen has brought security and calm to the family, and is a loving protector of Charlie.

Families will do everything they can to help a child with autism, and to hope that their child can become a happy and independent adult.  As stated by Temple Grandin, “We have got to work on keeping these children engaged with the world.”  And from Cesar Milan: “A dog is a vehicle, you know; a dog is a window to Mother Nature, and that's the closest species we have.”  Perhaps for some children, a companion dog will be the vehicle by which they can start to engage with the outside world. 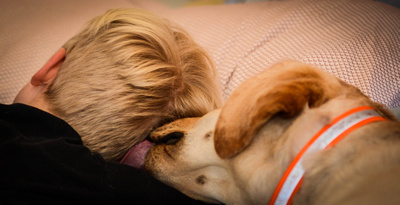