The film follows Charlie over a four year period, from age four to age eight, as he and his family are faced with the obstacles of autism.

The first scenes of the film establish Charlie as a non-verbal but energetic four year old who cannot speak or otherwise communicate with his parents, and with formidable behavioral impediments.  Interviews with his mother and father reveal that they both suffered from drug addiction, but are now in recovery as a result of Charlie.  They speak of their daily challenges with Charlie, and their concern for his future and his safety.  We learn that Charlie once ran out onto the Pacific Coast Highway near their home.  Among the early scenes of the film is Charlie surfing as he is held by his father on the surfboard, because Charlie has no fear.

Charlie has started daily intervention therapy to help with his communication and learning issues.  We interview his therapists and find out about how Charlie learns.  And we film Charlie’s therapy sessions to establish a baseline to compare his development as we continue our filming for four years.

The catalyst of the film is when Charlie and his family receive a specially trained service dog.  We film the dog chosen for Charlie and his litter-mates at three weeks and five weeks old.  We film the socialization and training that the dog must receive to qualify as a service dog for an autistic child.  We film the first moments of the introduction of the family to the dog, which the family names Aspen, after a place that has brought them joy.  And we film the first four days of their time together and with the trainers, who teach Charlie’s parents how to work with Aspen to have the best success in helping Charlie. 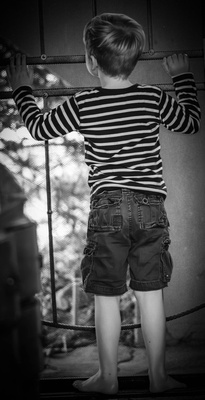 As the film continues, we learn about the developing relationship between Aspen and Charlie, and his role in the family.  Will Aspen help Charlie to engage with the world around him?  Will Aspen protect Charlie?

During the entirety of the film we continue to observe Charlie at his therapy sessions to see what he is learning and what progress he has made.  We film family outings and activities.

The film is interspersed with scientific and medical knowledge regarding autism, and treatment recommendations for working with autism behaviors.  To tell a story about a child with autism, some information has to be provided to answer the inevitable questions that arise: what is autism, and what can be done to help children with autism?

Over the four years, the adventures of Charlie and Aspen and the dynamics of the family illustrate the daily life of a family with a child with autism and their challenges.  We also see the commitment of the professionals who work with Charlie to help him adapt to the world around him.  And we see a tireless commitment by his parents to do all the things they can to bring a positive outcome to Charlie.  And of course, we see the love of a dog for a child.